Nothing like a little Mary Poppins music to get Friday started off right. I wonder how this song would be written today...... your tuppence invested prudently in sub-prime mortgages that required no proof of income and no down payment.... what a deal.

This week we also learn that the fed has been using taxpayer dollars to bail out foreign banks to the tune of $350B. 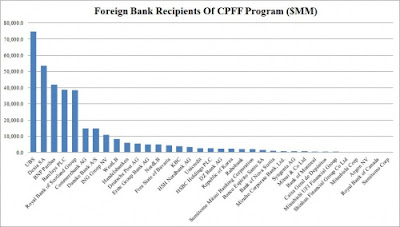 
One may be forgiven to believe that via its FX liquidity swap lines the Fed only bailed out foreign Central Banks, which in turn took the money and funded their own banks. It turns out that is only half the story: we now know the Fed also acted in a secondary bail out capacity, providing over $350 billion in short term funding exclusively to 35 foreign banks, of which the biggest beneficiaries were UBS, Dexia and BNP. Since the funding provided was in the form of ultra-short maturity commercial paper it was essentially equivalent to cash funding. In other words, between October 27, 2008 and August 6, 2009, the Fed spent $350 billion in taxpayer funds to save 35 foreign banks.