A light purse is a heavy curse. -- Poor Richard's Almanac


Fast Company magazine ran an article in 2007 entitled The Brand Called You by management guru Tom Peters that is still well worth reading. The gist of the article is don't think of yourself as employee 123 of Megalithic Corporation, but you're Me, Inc., an idependent consultant, a business with your own brand., and you must market that brand to grow your sphere of influence and power to increase your opportunities for success.

The current recession and the almost daily headlines of large scale layoffs by the nation's blue chip companies emphasize Peter's point that lifetime employment is a thing of the past, and you work on a project by project basis for whatever company needs your skillset. I certainly see evidence of this trend inside the company I work for where the core "permanent" staff is continually shrinking, and consultants are brought in on an as needed basis by project to make up for the shortfall.

This brings me to the point of this article... since everyone is really just an independent consultant responsible for their own life and livelihood, I think each individual should view their financial lives as if they were a corporation called Me, Inc (or Us, Inc. for couples). I'm a big believer that Me, Inc. should, at a minimum, prepare yearly financial statements such as income statements, balance sheets and even cash flow statements for the more sophisticated to assess the financial health of Me, Inc., analyze those statements against a set of objectives and make the necessary adjustments to spending and saving habits. 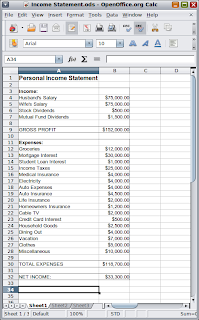 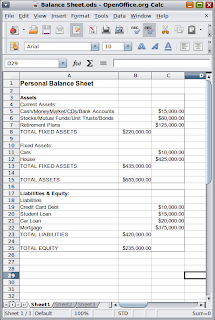 This type of exercise reinforces the concepts of budgeting, spending less than you make, debt reduction, and building equity in Me, Inc. Concentrate on compounding your book value per share like the Oracle of Omaha, Warren Buffett. Mr. Buffett's record at Berkshire Hathaway from 1965-2008 is 20.3% annually (326,319% cumulative) compared to the S&P 500 with dividends included for the same time period of 8.9% (4,276% cumulative), neither of which is too shabby.

Posted by The Grouch at 7:45 PM No comments: 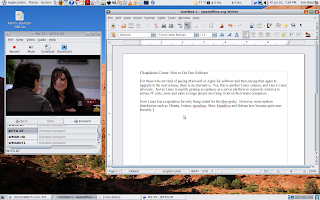 If you're not ready to cut the cord on Windows, try giving Linux a spin inside Sun's VirtualBox or configure a dual boot environment between Windows and Linux. Many tutorials exist on the web to walk you through these options step by step. I've read articles claiming that a private company would have to invest upwards of $10B in R&D to recreate the software developed by the open source Linux developers. That is a pretty strong sales pitch to me.
Posted by The Grouch at 4:59 PM No comments: