Quote of the Day: Byron York

The watchdog groups -- Taxpayers for Common Sense, WashingtonWatch.com, and Taxpayers Against Earmarks -- counted total earmark requests in the 2011 budget. Those requests were made by lawmakers earlier this year, but Democratic leaders, afraid that their party's spending priorities might cost them at the polls, decided not to pass a budget before the Nov. 2 elections. Now, they have distilled those earmark requests -- thrown some out, combined others -- into the omnibus bill under consideration in the Senate. While it's loaded with spending, looking back at the original earmark requests tells us a lot about the spending inclinations of both parties.

In the 2011 House budget, the groups found that House Democrats requested 18,189 earmarks, which would cost the taxpayers a total of $51.7 billion, while House Republicans requested just 241 earmarks, for a total of $1 billion.

Where did those GOP earmark requests come from? Just four Republican lawmakers: South Carolina Rep. Henry Brown, who did not run for re-election this year; Louisiana Rep. Joseph Cao, who lost his bid for re-election; maverick Texas Rep. Ron Paul; and spending king Rep. Don Young of Alaska. The other Republican members of the House -- 174 of them -- requested a total of zero earmarks.

Talk to Republicans, and they'll say it would be nice if there were no earmark requests at all, but party leaders can't control everybody. "Brown's retiring, Cao's defeated, Paul is Paul and Young is Young," one GOP aide shrugs. Still, the bottom line is that the House GOP's nearly perfect renunciation of earmarks is striking. "For a voluntary moratorium, it was impressive that there were only four scofflaws," says Steve Ellis of Taxpayers for Common Sense.

Grouch: I seem to recall candidate Obama saying something like: "We need earmark reform, and when I'm President, I will go line by line to make sure that we are not spending money unwisely." Clearly, this isn't happening. Of course, earmarks are just the tip of iceberg. Considering all the reckless spending and money printing with QEI & II, could the US be headed toward a jump in inflation to the high single digits or teens like back in the 1970's. Those who were born after 1980 have fortunately not experience this type of price environment before. 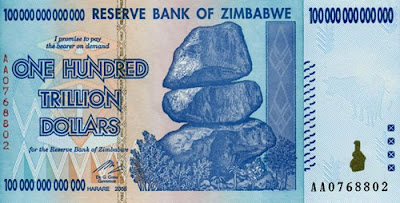