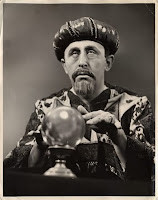 I have great fun routinely mocking people who bore the world with their predictions of the future. So the logical next step for me is to offer some predictions of my own for 2011. After carefully casting the chicken bones, reading the Tarot cards, holding a few midnight seances listening to Jim Cramer babble and whine, and much deep REM sleep in which I saw glorious visions of a wealthy future I predict 2011 will see many miraculous things:

1. QEII will end mid-year with nary a whimper.

2. Inflation will continue to rear its ugly head at the grocery stores and gaspumps.

4. US stock prices will return to their historic highs near 14000 on the Dow.

5.  Bond prices will not implode as widely predicted, and interest rates will remain low.

7. Natural gas prices will languish, and remain an incredible bargain for those who use it.

8.  The US government will continue to throw money at solar, wind power and bio-fuels even as they remain cost inefficient.  Natural gas will continue to be overlook as a replacement for oil, though there is a 100 year supply under our feet in North America.

10. Consumer spending will continue to climb even as credit card use fails to reach 2007 levels.

11.  The Euro will near parity with the dollar as the EU debt crisis deepens and more countries are forced to cut benefits.

12.  Gridlock in Washington D.C. will prove to be a blessing as the yearly Federal budget deficit is reduced more than expected and senseless politically motivated spending is stymied, ironically improving Obama's chances for reelection after a wobbly first two years in office.

13.  Telephone companies and cable companies will continue to struggle as more and more consumers feed up with paying high bills their ditch their service.  These companies are on their way to becoming nothing more than internet and wireless phone network suppliers.  The TV content providers will gain the upper hand and internet content streaming becomes more prevalent in preparation for full-scale internet TV.

14.  Auto companies will continue their strong comeback with Ford leading the way, while electric cars flop in the marketplace.

15.  Precious metal prices will level off after the 1st quarter, roughly 10% higher than today.

16.  Obamacare will remain unpopular, but intact, and will drive the costs of health care higher than if it had never been passed, as well as creating many new bureaucracies and regulations that stifle innovation.

18.  The developed world's businesses and governments will continue to be embarrassed by more Wikileak type disclosures.

19.  The "science" of global warming will continue to be refuted and disproven in spite of all the chicken little's of the world panhandling for government grants and trying to become the world's first carbon credit billionaire.

21.  Cap and Trade Tax legislation is dead for the near future.  But the Obama Administration and the EPA will do everything in their power to drive up the cost of oil through excessive regulation and drilling moratoriums in order to make so called "green" fuels cost competitive.

22.  The FCC will attempt to control information on the internet and the alternative news outlets to silence voices of dissent through measures like net "neutrality" and the "fairness" doctrine.

23.  The Feds will have to bail out one of the states, most likely California, Illinois, Nevada or Michigan, when they can not pay their debts, and the ensuing panic will create a golden opportunity to invest in municipal bonds.

24.  Banks will surprise pundits and be one of the best performing sectors in the market, and a new wave of consolidations will commence near the end of the year.

25.  In spite of all his complaints that he isn't taxed enough, Warren Buffett will not make a voluntary contribution to the US Treasury.

26.  The Feds will cede more Arizona territory to the Mexican drug lords as the failure to police the southern border becomes even more pronounced.

27.  Iran and North Korea will get the bomb.

28.  The US will sign a free trade agreement with South Korea, while inexplicably spurning a similar deal with Columbia.

29.  The counterfeiting of gold will become more prevalent.

30.  Blackmarkets will become more common for high taxed goods such as tobacco and booze.

What predictions do you have for the coming year?  A year from now we can all have a good laugh about how wrong we were.
Posted by The Grouch at 1:00 AM