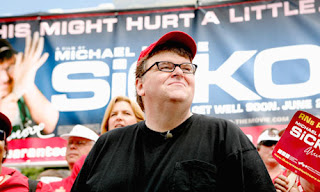 Via Wikileaks, we learn that Castro banned Michael Moore's 2007 "documentary," Sicko, because it painted such a "mythically" favourable picture of Cuba's healthcare system that the authorities feared it could lead to a "popular backlash" according to US diplomats in Havana.

The article goes on to state: The revelation, contained in a confidential US embassy cable released by WikiLeaks , is surprising, given that the film attempted to discredit the US healthcare system by highlighting what it claimed was the excellence of the Cuban system.

But the memo reveals that when the film was shown to a group of Cuban doctors, some became so "disturbed at the blatant misrepresentation of healthcare in Cuba that they left the room".

Castro's government apparently went on to ban the film because, the leaked cable claims, it "knows the film is a myth and does not want to risk a popular backlash by showing to Cubans facilities that are clearly not available to the vast majority of them."

The entire article can be found here.

Grouch: I am beginning to find it extremely disturbing that the foreign press is more reliable and informative than the domestic press in reporting on political and economic conditions in the US.
Posted by The Grouch at 12:00 PM