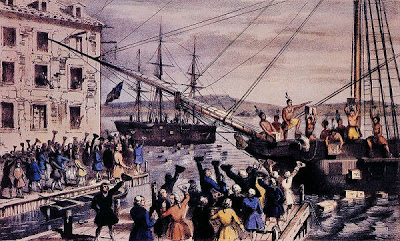 On December 16, 1773, after officials in Boston refused to return three shiploads of taxed tea to Britain, a group of colonists boarded the ships and destroyed the tea by throwing it into Boston Harbor. The incident remains an iconic event of American history called the Boston Tea Party.

The Tea Party arose from two issues confronting the British Empire in 1773: the financial problems of the British East India Company, and an ongoing dispute about the extent of Parliament's authority, if any, over the British American colonies without seating any elected representation. The North ministry's attempt to resolve these issues produced a showdown that would eventually result in revolution.
Posted by The Grouch at 10:42 AM