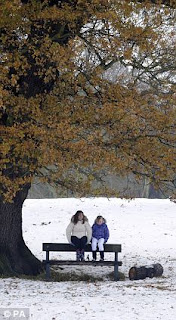 You can read the entire article here. To quote:


Last week, halfway through yet another giant, 15,000 delegate UN climate jamboree, being held this time in the tropical splendour of Cancun in Mexico, the Met Office [British Meteorological Office] was at it again.

Never mind that Britain, just as it was last winter and the winter before, was deep in the grip of a cold snap, which has seen some temperatures plummet to minus 20C, and that here 2010 has been the coolest year since 1996.

Globally, it insisted, 2010 was still on course to be the warmest or second warmest year since current records began.

But buried amid the details of those two Met Office statements 12 months apart lies a remarkable climbdown that has huge implications - not just for the Met Office, but for debate over climate change as a whole.

Read carefully with other official data, they conceal a truth that for some, to paraphrase former US Vice President Al Gore, is really inconvenient: for the past 15 years, global warming has stopped.

This isn't meant to be happening. Climate science orthodoxy, as promulgated by bodies such as the UN Intergovernmental Panel on Climate Change (IPCC) and the University of East Anglia Climatic Research Unit (CRU), says that temperatures have risen and will continue to rise in step with increasing CO2 in the atmosphere, and make no mistake, with the rapid industrialisation of China and India, CO2 levels have kept on going up.

According to the IPCC and its computer models, without enormous emission cuts the world is set to get between two and six degrees warmer during the 21st Century, with catastrophic consequences.

Last week at Cancun, in an attempt to influence richer countries to agree to give £20 billion immediately to poorer ones to offset the results of warming, the US-based International Food Policy Research Institute warned that global temperatures would be 6.5 degrees higher by 2100, leading to rocketing food prices and a decline in production.

The math isn't complicated. If the planet were going to be six degrees hotter by the century's end, it should be getting warmer by 0.6 degrees each decade; if two degrees, then by 0.2 degrees every ten years. Fortunately, it isn't.