Does the FCC Have Authority to Regulate the Internet? 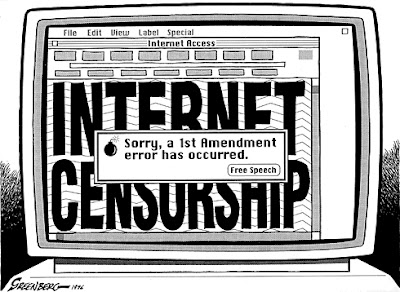 Of course, the answer is hell no.  Congress has not authorized it, and in April the DC district court affirmed the FCC has no authority to regulate the Internet.  However, on December 21st FCC Chairman Julius Genachowski intends to introduce an Internet regulation plan that includes five basic points: meaningful transparency; a ban on blocking lawful apps and services; a ban on unreasonable network management; an allowance for a certain amount of ISP network management; and rules governing wireless that calls for transparency and a basic no-blocking rule. On the surface, these items might sound innocuous, but this is just the beginning, not the end, and once government begins to regulate an industry the shennanegans start. Personally, I happen to like the Internet just the way it is-- a free and open marketplace of opinion where the best ideas win-- and don't want it to change. And I certainly don't want the big hand of the government smacking down whoever they happen to disagree with at the moment. As they say in the real world: if it ain't broke, don't fix it, and the Internet isn't broken.
Posted by The Grouch at 11:31 AM