What is the "Return" on Your Social Security "Investment"

Despite the naysayers (some may put me in this camp), odds are social security will be part of your future. No question our national pension systems has many well-documented problems, but they are potentially solvable through a combination of cost cutting and tax raises before the money runs out.

One question I've always had is Social Security worth it? Are the benefits you will received for a career's worth of taxes adequate compensation? If Social Security were treated as an investment what would be your compounded rate of return? I've read articles over the past several years that claim those returns are anywhere from negative to in the low teens. The latest answer provided by a new Urban Institute Social Security study is that you will received back more than you paid in. However, to arrive at this positive return the people conducting this study needed to bundle Social Security and Medicare, leading me to believe the picture for Social Security by itself is not so rosy. The Urban Institute assumes a 2% real return above inflation for their calculations, which given the current low interest rates seems to be an optimistic number.

A walk through the Urban Institutes numbers show that Social Security definitely plays favorites. Women make out better than men with their tax dollars because 1) they live longer 2) they are more likely to collect widow's benefits, and 3) they are not just stuck with their benefits, but are also entitled to half of the husband's benefit if that is higher. If you retired last year as an average wage-earning man, for example, you could expect a lifetime benefit worth $417,000 in today’s dollars on $345,000 in taxes. If you were a woman with the same work history, you could expect to collect $464,000 on the same taxes. 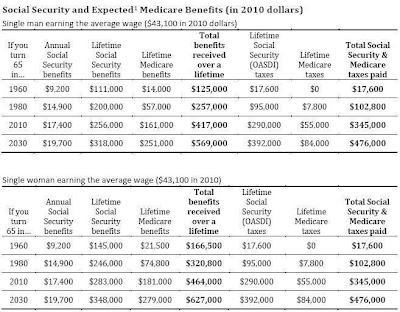 Other Social Security winners include married couples with single breadwinners (this is what you might expect from a system launched in 1935), as well as baby boomers and their parents.  The payments tend to decline for later generations after the baby boomers.  It is vital for them to save for retirement outside of Social Security. 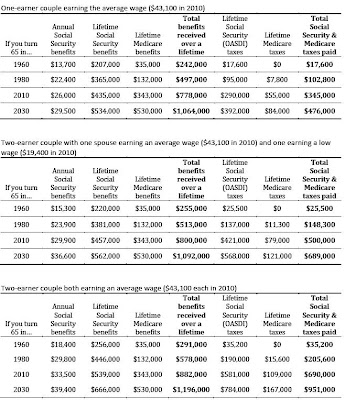 What is not covered in this study is the opportunity cost of the social security "investment," what people could earn if they were allowed to invest this money on their own.  A 30 - 40 year investment that does not at least double the original investment seems like a pretty crummy deal to me for those disciplined enough to save and invest on their own.
Posted by The Grouch at 1:00 AM