The day after Obama 2.0 was unveiled in the State of the Union Address, repackaging many familiar themes in new advertising and demonstrating that he has some limited understanding of the mid-term elections by talking about deficit reduction and job creation, the CBO has estimated the 2011 federal deficit will hit a record $1.5T due to a generally weak economy coupled with excessive spending.  These eye-popping numbers mean the government will continue to borrow 40 cents for every dollar it spends.  How long can this go on?  As Walt Kelly says in the Pogo comic strip: we have met the enemy and he is us..... not the post-Sputnik Russians, or the Chinese, or the Indians.  None of these countries could inflict the kind of economic damage we've inflicted on ourselves. 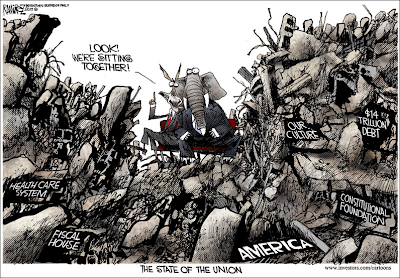