Up From the Projects 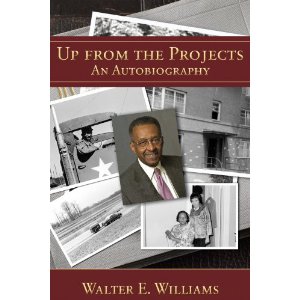 In a new book, Up From the Projects, nationally syndicated columnist and prolific author Walter E. Williams recalls some of the highlights and turning points of his life. From his lower middle class beginnings in a mixed but predominantly black neighborhood in West Philadelphia to his department chair at George Mason University, Williams tells an only in America story of a life of achievement.

Williams describes the influences of his early years such as the teachers who demanded his best efforts and made no excuses for him and tells how his two years in the army became an important part of his maturation process, in spite of the racism he encountered. He recounts his early time getting established in Los Angeles getting his B.A., going on to grad school at UCLA, and beginning his teaching career. And he tells how his subsequent move to the Urban Institute in Washington opened his eyes to how decisions are really made in D.C.

For those unfamiliar with Dr. Williams, here are a few Williamsisms:

"Sometimes I sarcastically, perhaps cynically, say that I'm glad that I received virtually all of my education before it became fashionable for white people to like black people. By that I mean that I encountered back then a more honest assessment of my strengths and weaknesses. Professors didn't hesitate to criticize me—sometimes to the point of saying, 'That's nonsense.'"

"Racial discrimination is not the problem of black people that it used to be. Today I doubt you could find any significant problem that blacks face that is caused by racial discrimination. The 70% illegitimacy rate is a devastating problem, but it doesn't have a damn thing to do with racism. The fact that in some areas black people are huddled in their homes at night, sometimes serving meals on the floor so they don't get hit by a stray bullet—that's not because the Klan is riding through the neighborhood."

"I try to write so that economics is understandable to the ordinary person without an economics background. I think it's important for people to understand the ideas of scarcity and decision-making in everyday life so that they won't be ripped off by politicians. Politicians exploit economic illiteracy."

"For the first time in my lifetime—and I'm approaching 75 years old—you hear Americans debating about the U.S. Constitution. You hear them saying 'This is unconstitutional' or 'We need limits on government'—things that I haven't heard before. I've been arguing them for years, but now there's widespread acceptance of the idea that we need to limit the government."

"In 1794, Congress appropriated $15,000 to help some French refugees. James Madison stood on the House floor and said he could not take to lay his finger on that article in the Constitution that allows Congress to take the money of its constituents for the purposes of benevolence. Well, if you look at the federal budget today, two-thirds to three-quarters of it is for the purposes of benevolence."

"We need a constitutional amendment that limits the amount of money the government can spend. Let's say 18% of GDP to start. The benefit of a spending limitation amendment is that you're going to force Congress to trade off against the various spending constituencies. Somebody says, 'I want you to spend $10 billion on this,' and the congressman can respond, 'My hands are tied, so you have to show me where I can cut $10 billion first.'"

"A historian writing 100 or 200 years from now might well say, 'You know, there was this little historical curiosity that existed for maybe 200 years, where people were free from arbitrary abuse and control by government and where there was a large measure of respect for private property rights. But then it went back to the normal state of affairs.'"

Anyone interested in hearing more of Williams' point of view can look up What is a Right? or his PBS show "Good Intentions."
Posted by The Grouch at 1:00 AM