The Difference Between Metaphor and Action 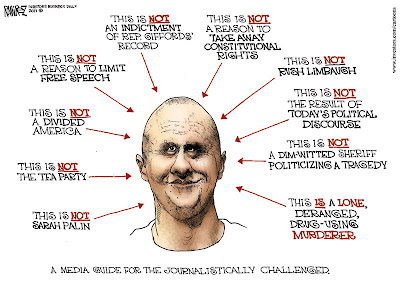 Most of the blogs I routinely read have remained silent on the shooting this weekend in Tuscon of Rep. Giffords.  Like most people I find this act reprehensible and mourn for the victims and their families as I hope for the full recovery of all who were wounded.  This is an unspeakable tragedy and no rational person wants our elected Representatives living in fear of speaking to their constituents, whether those constituents agree with their political beliefs or not.

What we know now is that the shooter, Jarod Lee Loughner, appears to be a deeply disturbed individual who was obsessed with Rep. Giffords from as early as 2007, when he asked a bizarre question at one of her events and received an answer back that he felt was humiliating.  As the facts have trickled out, it is obvious this act is not politically motivated, but the product of some kind of twisted reality that exists only in the mind of Loughner.

What I find truly repugnant and irresponsible in this entire matter is the reaction of the media.  Before any facts were known the titans of the mainstream media were rushing to blame the foes of big government, and calling for those voices to be silenced.   The enthusiasm and speed at which they jumped to this conclusion speaks volumes as they sought to exploit the act of a lone madman to push their agenda of the Fairness Doctrine, limiting free speech, gun control, the welfare state, class envy, and amnesty for illegals to keep big government rolling.

Since the beginning of time-politic, metaphors of war have been used to describe political struggles between different factions.  This  rhetoric is certainly nothing new, and has been used by both sides of the political spectrum.  Why is the media targeting one group of people with whom it disagrees?  The answer is obvious.  The apolitical madman who committed this act is alone to blame. No one demonized by the TV and print media made him scrawl "Die, bitch" on a personal correspondence from Rep. Giffords, and then pull the trigger repeatedly that Saturday morning.  There is a huge difference between metaphor and action.  The mainstream media knows this and deliberately crossed the line to promote its political agenda.  Oh, you thought the news media was impartial?  Really?  Why do you think the alternative media has grown so popular and now must be silenced?

I, for one, believe in rigorous political debate, especially now that the country is at a crossroads, and the well-being of every citizen is threaten by massive government debt and the perpetuation of the status quo.  But those who profit handsomely and derive their power from the status quo will not go down without a fight.  There is way too much taxpayer money at stake.  May the side with the most powerful arguments win.  However, the public needs to loudly cry foul the next time such cheap tricks are attempted by so-called impartial journalists.

The most eloquent voice in the midst of this tragedy has been John Green, father of Christina Green, the 9 year old born on 9/11.  I'll let him have the final say:

"We know she wouldn’t want things changed. She would not want restrictions… I think there’s always going to be random acts. I think Christina and our family generally believes that there’s a lot of good people out there and that’s what we’re going to take away from this… We don’t wish this on anybody and I’m sure they don’t wish this on us. If we live in a country like the United States where we are more free than anywhere else then we are subject to things like this happening. And, that’s the price we have to pay."