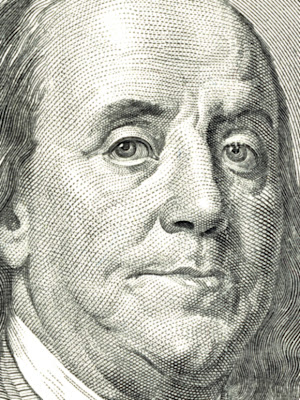 The country could certainly use the wise counsel of Ben Franklin these days.  Some of my favorite quotes from Franklin are:

A good conscience is a continual Christmas.

A life of leisure and a life of laziness are two things. There will be sleeping enough in the grave.

A man wrapped up in himself makes a very small bundle.

A penny saved is a penny earned.

Beware of little expenses. A small leak will sink a great ship.

An investment in knowledge pays the best interest.

By failing to prepare, you are preparing to fail.

Certainty? In this world nothing is certain but death and taxes.

Diligence is the mother of good luck.

Dost thou love life? Then do not squander time, for that is the stuff life is made of.

Each year one vicious habit discarded, in time might make the worst of us good.

Even peace may be purchased at too high a price.

Experience is a dear teacher, but fools will learn at no other.

God helps those who help themselves.

Genius without education is like silver in the mine.

Having been poor is no shame, but being ashamed of it, is.

He that displays too often his wife and his wallet is in danger of having both of them borrowed.

He that is good for making excuses is seldom good for anything else.

He that is of the opinion money will do everything may well be suspected of doing everything for money.

He that rises late must trot all day.

He that waits upon fortune, is never sure of a dinner.

He who falls in love with himself will have no rivals.

I conceive that the great part of the miseries of mankind are brought upon them by false estimates they have made of the value of things.

I saw few die of hunger; of eating, a hundred thousand.

I should have no objection to go over the same life from its beginning to the end: requesting only the advantage authors have, of correcting in a second edition the faults of the first.

If a man could have half of his wishes, he would double his troubles.

If you would know the value of money, go and try to borrow some.

It takes many good deeds to build a good reputation, and only one bad one to lose it.

Life's Tragedy is that we get old to soon and wise too late.

Many people die at twenty five and aren't buried until they are seventy five.

Rather go to bed with out dinner than to rise in debt.

Rebellion against tyrants is obedience to God.

Remember not only to say the right thing in the right place, but far more difficult still, to leave unsaid the wrong thing at the tempting moment.

Tell me and I forget. Teach me and I remember. Involve me and I learn.

The Constitution only gives people the right to pursue happiness. You have to catch it yourself.

The doors of wisdom are never shut.

The worst wheel of the cart makes the most noise.

There are three faithful friends - an old wife, an old dog, and ready money.

There are three things extremely hard: steel, a diamond, and to know one's self.

There is no kind of dishonesty into which otherwise good people more easily and frequently fall than that of defrauding the government.

There never was a truly great man that was not at the same time truly virtuous.

They who can give up essential liberty to obtain a little temporary safety deserve neither liberty nor safety.

Three can keep a secret, if two of them are dead.

Wars are not paid for in wartime, the bill comes later.

Wealth is not his that has it, but his that enjoys it.

Whatever is begun in anger ends in shame.

When in doubt, don't.

Where there's marriage without love, there will be love without marriage.

Who is rich? He that rejoices in his portion.

Wine is constant proof that God loves us and loves to see us happy.

You may delay, but time will not.

Your net worth to the world is usually determined by what remains after your bad habits are subtracted from your good ones.