Time Magazine Calls the Bottom of the Housing Market? 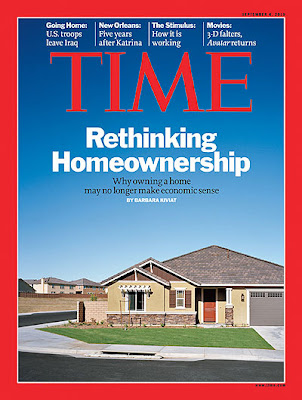 For those who believe that magazine covers are great contrarian indicators, this September Time magazine cover reflects enough pessimism to call the bottom of the US housing market. 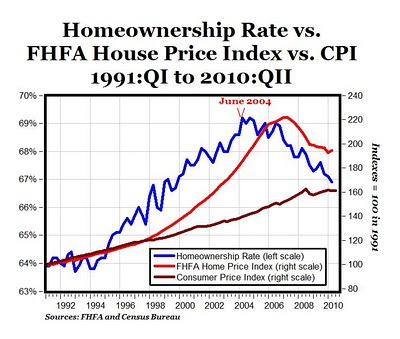 From a letter sent to President Bush by Barney Frank, Nancy Pelosi, Maxine Waters and 73 other Congressional Democrats on June 28, 2004:

"We urge you to reconsider your Administration's criticisms of the housing-related government sponsored enterprises (the GSEs) and instead work with Congress to strengthen the mission and oversight of the GSEs. We write as members of the House of Representatives who continually press the GSEs to do more in affordable housing.

"Our position is not based on institutional loyalty, but on concern for the GSE's affordable housing function. We appeal to you to agree to work on legislative proposals that foster sound oversight and vigorous affordable housing efforts instead of mounting assaults in the press. We also ask you to support our efforts to push the GSEs to do more affordable housing. Specifically, join us in advocating for more innovative loan products and programs for people who desire to buy manufactured housing, similar products to preserve as affordable and rehabilitate aging affordable housing, and more meaningful GSE affordable housing goals from HUD.

"In closing, we reiterate that an exclusive emphasis on safety and soundness, without an appropriate balance in focus on the affordable housing mission of the GSEs, is misplaced."

The Grouch:  The above graph reflects the conditions of the housing market in 2004 when the letter was sent from Congress to then President Bush:

Five years later in 2009, the U.S. House of Representatives Committee on Oversight and Government Reform concluded that: "The consequences of these policies [the political obsession with homeownership] have brought the entire global financial system to the brink of collapse, destroying trillions in equity and untold numbers of lives. It is essential to reexamine the borrow-and-spend, high-leverage policies that became prevalent in the mortgage market as a result of well-intentioned-but-reckless decisions made by elected officials on behalf of the American people."

I couldn't agree more with these conclusions.  In fact, I don't see how we can have any serious financial reform in this country until the link between housing and politicians is broken for good.  Fannie and Freddie need to be broken up into a "good bank/bad bank," so the bad bank could be wound down and the good bank broken up into multiple pieces and privatized-- no more GSEs with private profits and public losses subject to political manipulation.  But I don't think the politicians willingly give up this type of power.  What do you think?