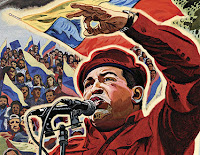 Today Venezuelans go to the polls to see if Hugo Chavez can increase his hold over this country, in spite of the recession and a rampant crime wave that has touched many families.  The growing opposition to Chavez has prompted the state to get into the restaurant business to remind people where their priorities should lie.

To quote from the NY Times article:

Tucked into a corner on Plaza Bolívar is Café Venezuela, part of a chain of open-air restaurants established by the government this year. The cafe serves Venezuela-grown coffee and Venezuelan snacks like cassava bread at so-called solidarity prices, half or less than what customers would pay elsewhere.

Ideology is also on the menu. The cafes were created by Comerso, a state holding company for socialist enterprises, which also manages stores that sell everything from subsidized arepas, the crispy corn cakes that are the staple of the Venezuelan diet, to inexpensive Chinese cars. The branch in Plaza Bolívar replaced a clothing store that once occupied the same spot and was expropriated live on television by Mr. Chávez.

The planners behind the cafes have multiple objectives: to provide food and conviviality at democratic prices, to serve as commercial linchpins to renew some of the city’s most run-down districts and, not incidentally, to remind satisfied patrons of the government’s populist program in an election year.

Note it is the Times reporter, not a Venezuelan Chavista, who coins the phrase "democratic prices."

But the best part of the story is this:

Doris, 20, said she still planned to vote for Mr. Chávez and his list of congressional candidates. “Supporting Chávez is the best way to get a job,” she said. She is studying petroleum production and hopes the correct political views can help her land a job at the national oil company.

I guess that is called crony socialism. 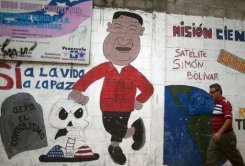 However, there does seem to be some legitimate opposition to Chavez, but how many seats they can actually capture remains to be seen. 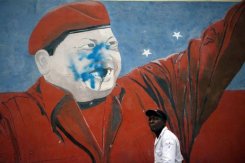 HT: Kids Prefer Cheese
Posted by The Grouch at 9:59 AM

Labels: Markets in Everything