Ain't Technology Grand, or Can It Be a Little Scary Too? 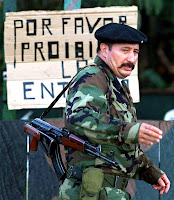 In a scene that could be straight out of a Tom Clancy novel, the Columbian military took out FARC #2 leader and top military commander Victor Julio Suárez Rojas, alias 'Jorge Briceño Suarez' or 'Mono Jojoy' by giving him a pair of boots with a GPS chip embedded in the heel.  This is a real story.  El Mono was a diabetic and suffered with foot problems.  The Columbian government intercepted a message coming from the jungle ordering special footwear and filled that order for him.  The rest is history.  Technology has come a long way since the CIA tried to knock off Castro with exploding cigars.

For those who don't know, FARC is a peasant army which has proclaimed itself as a revolutionary agrarian, anti-imperialist Marxist-Leninist organization of Bolivarian inspiration. It claims to represent the rural poor in a struggle against Colombia's wealthier classes, and opposes United States influence in Colombia (e.g. Plan Colombia), neo-imperialism, monopolization of natural resources by multinational corporations, and paramilitary or government violence. It funds itself principally through ransom kidnappings and taxation of the illegal drug trade.

Another item to ponder is that cell phone in your pocket or clipped to your hip has a GPS device in it also that can be used to track your movements and pinpoint your exact location.  Not that that would ever happen in a free society, but sometimes only the paranoid survive.
Posted by The Grouch at 7:12 AM