As the sun starts to set on the Castro brothers rule over Cuba, Fidel recently admitted to a visiting American journalist that the Cuban model of Communism doesn't work any longer, a rare admission for someone who has stayed out of the spotlight for the past four years.  The fact that cash-strapped Cuba is going through hard economic times is nothing new.

Even after the fall of the Soviet Union, Cuba has clung to its communist system.  The state controls over 90 percent of the economy, paying workers salaries of roughly $20 a month in return for free health care and education, and nearly free transportation and housing. A portion of every citizen's food needs are sold to them through ration books at heavily subsidized prices. President Raul Castro and others have instituted a series of limited economic reforms, warning Cubans that they need to start working harder and expecting less from the government. But the president has also been clear he has no desire to depart from Cuba's socialist system or embrace capitalism.

Grouch:   Now if we can only get this message to certain people in government, both elected and appointed, and to the Hollywood types like Michael Moore and Oliver Stone who keep churning out propaganda.  As a libertarian, I've always though the quickest way to bring about the downfall of Cuban communism is to completely open up political and economic relations with Cuba.  Once the people get a taste of freedom and the prosperity it brings, they will gradually move away from Communism and the near complete dependence on government in all aspects of their lives.  No longer will the rallying cry be: "90 miles to freedom." 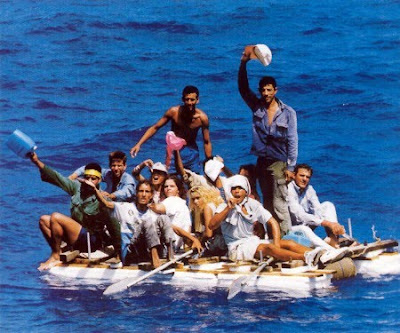