"The denial of the possibility that there is an endpoint [to the welfare state] is crucial to the liberal enterprise," says Dr. William Voegeli, author of the new book, Never Enough: America's Limitless Welfare State and a visiting scholar at Claremont McKenna College's Henry Salvatori Center for the Study of Individual Freedom in the Modern World.

In this Reason.tv interview, Voegeli traces recent federal government expansions to President Franklin Roosevelt's introduction of a "second Bill of Rights" that included the right to housing, education, and medical care.

Grouch: I've always believed that if you subsidize something you get more of it, whether you're talking unemployment benefits or welfare. Whether Clinton mean it or not when he said "Welfare should be a hand up, not a way of life," he was certainly on the right track. However, does extended unemployment benefits to 99 weeks encourage more unemployment? 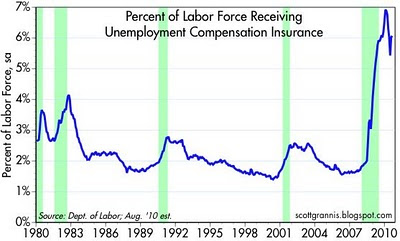 Robert Barro, in an article entitled "The Folly of Subsidizing Unemployment" in Monday's WSJ, seems to think so.  His "calculations suggest the jobless rate could be as low as 6.8%, instead of 9.5%, if jobless benefits hadn't been extended to 99 weeks." He goes on to state:


... it is reasonable during a recession to adopt a more generous unemployment-insurance program. In the past, this change entailed extensions to perhaps 39 weeks of eligibility from 26 weeks, though sometimes a bit more and typically conditioned on the employment situation in a person's state of residence. However, we have never experienced anything close to the blanket extension of eligibility to nearly two years. We have shifted toward a welfare program that resembles those in many Western European countries.

The administration has argued that the more generous unemployment-insurance program could not have had much impact on the unemployment rate because the recession is so severe that jobs are unavailable for many people. This perspective is odd on its face because, even at the worst of the downturn, the U.S. labor market featured a tremendous amount of turnover in the form of large numbers of persons hired and separated every month.

For example, the Bureau of Labor Statistics reports that, near the worst of the recession in March 2009, 3.9 million people were hired and 4.7 million were separated from jobs. This net loss of 800,000 jobs in one month indicates a very weak economy—but nevertheless one in which 3.9 million people were hired. A program that reduced incentives for people to search for and accept jobs could surely matter a lot here.

I wouldn't argue that unemployment benefits are a living wage, but are they enough to keep people from pursuing job opportunities as energetic as they might with no check coming in? What do you think?

HT: Calafia Beach Pundit
Posted by The Grouch at 11:52 AM