Mario Vargas Llosa, Winner of the 2010 Nobel Prize for Literature 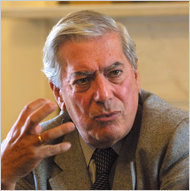 Congratulations to Peruvian writer Mario Vargas Llosa, winner of the 2010 Nobel Prize in Literature on Thursday, whose deeply political work vividly examines the perils of power and corruption in Latin America. In 2005, he gave a lecture at the American Enterprise Institute, “Confessions of a Liberal,” in which he said:


For example, there are liberals who believe that economics is the field through which all problems are resolved and that the free market is the panacea for everything from poverty to unemployment, marginalization and social exclusion. These liberals, true living algorithms, have sometimes generated more damage to the cause of freedom than did the Marxists, the first champions of the absurd thesis that the economy is the driving force of the history of nations and the basis of civilization. It simply is not true. Ideas and culture are what differentiate civilization from barbarism, not the economy. The economy by itself, without the support of ideas and culture, may produce optimal results on paper, but it does not give purpose to the lives of people; it does not offer individuals reasons to resist adversity and stand united with compassion or allow them to live in an environment permeated in humanity. It is culture, a body of shared ideas, beliefs and customs--among which religion may be included of course--that gives warmth and life to democracy and permits the market economy, with its competitive, cold mathematics of awarding success and punishing failure, to avoid degenerating into a Darwinian battle in which, as Isaiah Berlin put it, "liberty for wolves is death to the lambs." The free market is the best mechanism in existence for producing riches and, if well complemented with other institutions and uses of democratic culture, launches the material progress of a nation to the spectacular heights with which we are familiar. But it is also a relentless instrument, which, without the spiritual and intellectual component that culture represents, can reduce life to a ferocious, selfish struggle in which only the fittest survive.

Thus, the liberal I aspire to be considers freedom a core value. Thanks to this freedom, humanity has been able to journey from the primitive cave to the stars and the information revolution, to progress from forms of collectivist and despotic association to representative democracy. The foundations of liberty are private property and the rule of law; this system guarantees the fewest possible forms of injustice, produces the greatest material and cultural progress, most effectively stems violence and provides the greatest respect for human rights. According to this concept of liberalism, freedom is a single, unified concept. Political and economic liberties are as inseparable as the two sides of a medal. Because freedom has not been understood as such in Latin America, the region has had many failed attempts at democratic rule. Either because the democracies that began emerging after the dictatorships respected political freedom but rejected economic liberty, which inevitably produced more poverty, inefficiency and corruption, or because they installed authoritarian governments convinced that only a firm hand and a repressive regime could guarantee the functioning of the free market. This is a dangerous fallacy. It has never been so. This explains why all the so-called "free market" Latin American dictatorships have failed. No free economy functions without an independent, efficient justice system and no reforms are successful if they are implemented without control and the criticism that only democracy permits. Those who believed that General Pinochet was the exception to the rule because his regime enjoyed economic success have now discovered, with the revelations of murder and torture, secret accounts and millions of dollars abroad, that the Chilean dictator, like all of his Latin American counterparts, was a murderer and a thief.

The Grouch: For Americans, the liberalism Vargas Llosa refers to above would translate in our culture to classical liberalism, or somewhere between conservative and libertarian.  He is not the stereotypical left wing socialist/communist Latin American writer, which makes his selection all the more remarkable. In an interview with The NYTs in 2002, Mr. Vargas Llosa said that it was the novelist’s obligation to question real life. “I don’t think there is a great fiction that is not an essential contradiction of the world as it is,” he said. “The Inquisition forbade the novel for 300 years in Latin America. I think they understood very well the seditious consequence that fiction can have on the human spirit.”
Posted by The Grouch at 4:00 AM