Have the Trillions Given to Charity Solved Anything? 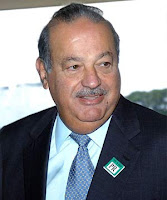 In a Bloomberg article, Mexican billionaire Carlos Slim, the richest man in the world is quoted as saying: "The only way to fight poverty is with employment. Trillions of dollars have been given to charity in the last 50 years, and they don’t solve anything."

Buffett, chairman of Berkshire Hathaway Inc., and Microsoft Corp. cofounder Gates have signed up more than 30 philanthropists, including Larry Ellison and Paul Allen, to their Giving Pledge initiative.

Slim counters: "To give 50 percent, 40 percent, that does nothing. There is a saying that we should leave a better country to our children. But it’s more important to leave better children to our country."

Who do agree with?  Is it better to create jobs than donate to charity?  Is exhibit A in this argument the over $9 trillion spent in the war on poverty that has failed to end poverty?
Posted by The Grouch at 1:00 AM