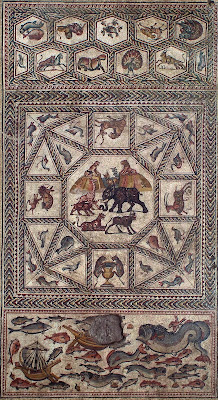 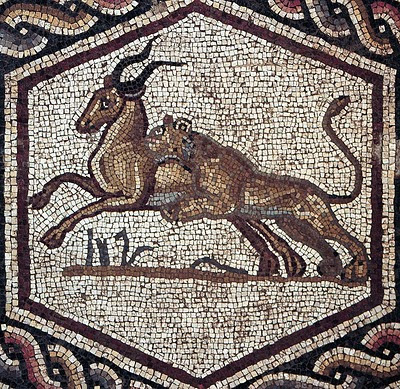 I became fascinated with Rome both from having read the accounts of Rome in the Bible and from reading Robert Graves' books I, Claudius and Claudius the God as well as watching the PBS series.  Recent interest was revived by the cable series Rome, which sought to capture the political intrigue of Rome through the eyes of two of its soldiers who serve the ambitions of the noblemen. I don't view Rome as an ancient civilization, but just on older version of ourselves, schemers balanced by the occasional wise man.

Roman floor mosaics and wall paintings were the usual fashionable decor of the time, and typical for the homes of the prosperous. Floor mosaics are much better preserved than wall paintings. Just a reminder--- this is decor, not fine art; think of them like rugs in our time. The Lod mosaics are a recent find. They are currently on display in NYC. Here is there story: