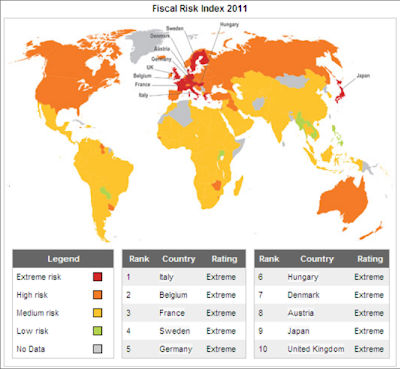 Maplecroft just released its fiscal risk index for ranking of 163 countries. Europe trumps all other regions with 11 out of twelve countries rated as "extreme risk." However, quite surprisingly, only one PIIGS country--Italy which takes the top spot--is in the top 12.

One problem within Europe is that it has a low labor participation rate in the 65+ age bracket. In fact, the labor market participation of age 65+ amongst the ‘extreme risk’ nations ranges from 1.4% in France, 7.71% in UK, to 11.7% in Sweden, vs. a 28% average across all countries ranked in the index.

Although the United States is not ranked among the "extreme fiscal risk," the country is classified as "high risk", along with Spain, Australia, Canada, and Russia.

The dependency ratio in the U.S. is 22 in 2010, but is projected to climb rapidly to 35 in 2030, according to the U.S. Census Bureau, mainly due to baby boomers moving up into the 65+ age bracket. The ratio then will rise more slowly to 37 in 2050. The labor participation for age 65 and over in the U.S. is at 17.5 according to data at Bureau of Labor Statistics (BLS). This is better than most of the European countries, but below the overall average of 28%.

"...in high risk countries, it is increasingly likely that the private sector will be called upon to contribute in the form of pensions and private health care.... Without significant adjustments, such as raising taxes or reducing spending, countries risk going bankrupt."

A highly productive labor force and relatively young population makeup tend to mean sustainable prosperity and better odds at climbing out of a hole. So, while widespread protests are still going on in Europe over pension age being raised and many austerity measures, amid the European sovereign debt crisis, the U.S. and other countries in the same “high fiscal risk” could be the wave 2 of this global fiscal chain of events.

Grouch: I have always found it quite troubling that many US politicians have always held up the European socialist model as an example the US should follow. Notice where the concentration of red is on this map.
Posted by The Grouch at 7:58 AM