Some of you may have received this email over the past several days:


Biting the bullet—cutting expenses. I HOPE YOU WILL PARTICIPATE, AND DO YOUR PART !

The President ordered the cabinet to cut a $100 million from the $3.5 trillion federal budget.

I’m so impressed by this sacrifice that I have decided to do the same thing with my personal budget. I spend about $2000 a month on groceries, household expenses, medicine, utilities, etc, but it’s time to get out the budget cutting ax, go line by line through my expenses, and cut back!

I’m going to cut my spending at exactly the same ratio -1/35,000 of my total budget. After doing the math, it looks like instead of spending $2000 a month; I’m going to have to cut that number by six cents!

Yes, I’m going to have to get by with $1999.94, but that’s what sacrifice is all about. I’ll just have to do without some things, that are, frankly, luxuries. (Did the prez actually think no one would do the math?)

I was so inspired by this email that I also decided to participate in the sacrifice, but was hardpressed to identify what I spent 6 cents on over the course of the month. I therefore decided to sacrifice 100 times more than our political leaders and give up coffee one day a week for a total savings of $6 a month. Why can't they make a similar sacrifice? 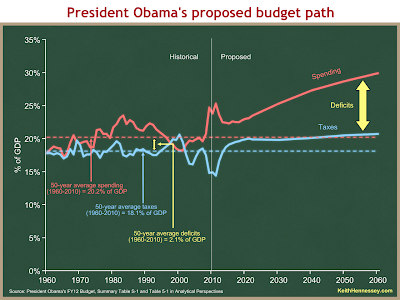