Picture of the Day: The Tools of Revolutionaries 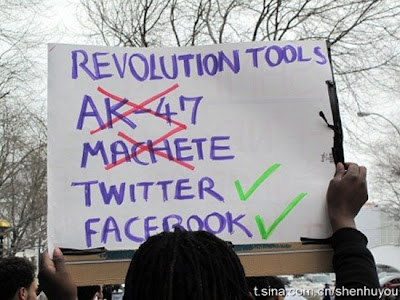 "Social media is a revolutionary force. We know that, but we're still catching up with its implications. A leader of the Egyptian revolt was a Google executive. Could the future be any clearer?

No takeable dictatorship will survive this era. The ones that do last will be so effectively totalitarian that their very brutishness will be their bulwark.

A Hollywood director once said that a great Western is defined by this dynamic: "The villain has arrived while the hero is evolving." Egypt itself is evolving. May its people be heroes and do great things."

~ Peggy Noonan, from the Wall Street Journal
Posted by The Grouch at 1:00 AM

Labels: Picture of the Day