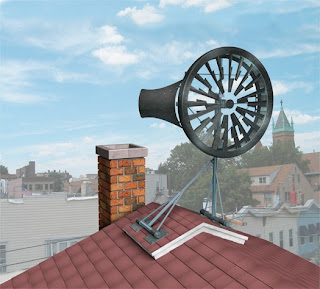 Among homeowners, wind energy has never caught on, in large part because personal turbines are often noisy and inefficient. Most turbines need strong winds to turn a heavy central generator and create current, a design with two main disadvantages. First, the gears make a lot of noise. Plus, the generator is positioned at the blades’ center, which moves at one tenth the speed of the periphery. And less speed translates to less power.

Honeywell’s wheel-shaped WT6500 takes an entirely new approach. Magnets mounted near the tips of its 20 blades sweep through an outer ring of copper coils to produce a current, making the entire wheel the generator. Because this arrangement traps energy from the fast-moving blade tips and eliminates the heavy central generator, the WT6500 can pull a current from winds as slow as two miles an hour (most home turbines need 8mph gusts). Better suited to home use than other turbine designs, the wheel is six feet in diameter, whisper-quiet, and can produce up to 1,500 kilowatt-hours of power per year—enough to replace about 15 percent of an average household’s energy bill. Depending on an area’s clean-energy incentives, the turbine can pay for itself in only a couple of years, though most owners will make back their investment in five to 10.

Grouch: I'd love to have one of these on my roof, but the economics of the purchase don't look particularly good for this $10K purchase.  Under optimal conditions (i.e., windy all the time), at 13 cents per kilowatt hour (what my electric company charges), I'd save $195 a year, for a payback period of a little over 51 years.  But realistically, the wind won't be blowing all the time.  If I'm very lucky and the wind blows 50% of the time, my payback period is now over 100 years.  But if I hit the 15 - 20% average, my payback period is over 200 years.  My guess would be the useful lifetime for this type of machine is somewhere on the order of 20 - 25 years, making it almost impossible to break even on this investment unless my electricity rates were to triple or quadruple.

These first versions will probably be toys for the rich, who may not care whether they are economically sound investments.  If the prices for this type of product begin to come in at under $800, they may be worth a serious look for the average homeowner in windy locations.
Posted by The Grouch at 11:31 AM