Why Gridlock is Good for Investors 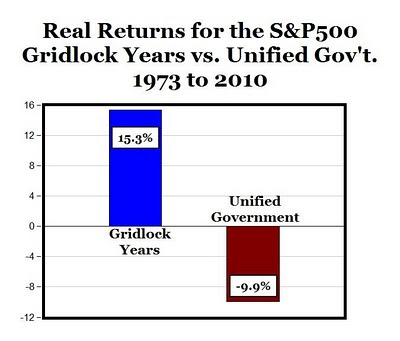 "Since 1973, using the price of gold as a deflator (instead of the Consumer Price Index, which has suffered from style drift over the years) real, inflation-adjusted returns for the S&P 500 were a fabulous 15.3 percent gain in “gridlock” years, and a horrible 9.9 percent loss in years with unified government (see chart above). That’s a 25 percentage point difference.

The reason for this difference is simple: Unified governments spend far more, and more quickly, and expand regulation much more than split governments do. Programs sail through, the dollar is jeopardized, and investors seek real assets like gold to counteract the political risks of an activist government.

When it comes to split government and real returns, the right answer is “divided we stand, united we fall.”

~ Eric Singer, one of the managers of the Congressional Effect Fund, the first mutual fund to explicitly seek to minimize investor exposure to potentially negative impact of new and proposed Congressional legislation on the broad stock market.

-----------------------------------------
Grouch: I've always joked the country would be better off if Congress adjourned indefinitely and most of the administration went on an extended vacation.  Ok, it really wasn't that much of a joke, more like a fantasy imagining the returns churned out by and an unfettered US economy and US entrepreneurs.  I think the current unified government more than proves Singer's point that they "spend far more, and more quickly, and expand regulation."