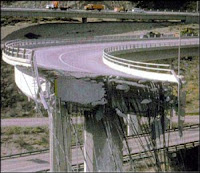 Just how bad are the finances of the State of California and its municipalities?  Bad enough that even Willie Brown is speaking up just as the state has begun issuing IOUs again and furloughing workers.  The dyed-in-the-wool Democrat and notoriously flamboyant 30-year veteran of the California State Assembly, is complaining about overpaid government workers.  From a recent column in the San Francisco Chronicle:


If we as a state want to make a New Year's resolution, I suggest taking a good look at the California we have created. From our out-of-sync tax system to our out-of-control civil service, it's time for politicians to begin an honest dialogue about what we've become.

The system was set up so politicians like me couldn't come in and fire the people (relatives) hired by the guy they beat and replace them with their own friends and relatives.

Over the years, however, the civil service system has changed from one that protects jobs to one that runs the show.

The deal used to be that civil servants were paid less than private sector workers in exchange for an understanding that they had job security for life.

But we politicians, pushed by our friends in labor, gradually expanded pay and benefits to private-sector levels while keeping the job protections and layering on incredibly generous retirement packages that pay ex-workers almost as much as current workers.

Talking about this is politically unpopular and potentially even career suicide for most officeholders. But at some point, someone is going to have to get honest about the fact that 80 percent of the state, county and city budget deficits are due to employee costs.

Is this one of those Nixon goes to China moments?  Maybe.  It's encouraging to see people like Willie Brown and Barney Frank realizing the error of their ways.  Facts are hard things to deny for forever.  Now we need those who created the mess to fix it instead of just kicking the can down the road.  It's rare to see leadership and character among politicians but now is a time where the country sorely needs it, and it has gone missing for many years.

Unfortunately, this is not just an American problem.  Governments all across the world have been overly generous in their commitments to public employees and the social safety net they've built for their citizens. Don't believe me?  Then take a look at this:

That should be enough to scare the hell out of anybody, and does not bode well for the future economic performance of the major western economies.
Posted by The Grouch at 5:13 AM