For those who believe that governments are efficient allocators of capital, we have this story out of the UK.   More than half of Britian's wind farms have been built where there is not enough wind to make them efficient producers of energy. 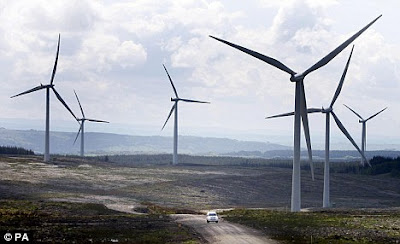 Europe's largest wind farm, Whitelee, near Glasgow (pictured above), contains 140 turbines but ran at only 25% of capacity last year.  The most anemic project in Britain was Blyth Harbour in Northumberland, where the nine turbines reached a feeble 4.9 per cent of their capacity. This was followed closely by Chelker reservoir in North Yorkshire which operates at only 5.3 per cent of its potential. The ten turbines at Burton Wold in Northamptonshire have been running for just three years, but achieved only 19 per cent capacity. Many theorize that the financial incentives designed to help Britain meet green energy targets are encouraging firms to site their developments badly, where there isn't enough wind to make them economically self-sustaining. Under the controversial Renewable Obligation scheme, British consumers pay £1billion a year in their fuel bills to subsidize the drive towards renewable energy (sound like Cap and Tax to anyone?). Some academics suggest that the full subsidy be restricted to turbines which achieve capacity of 30 per cent or more – managed by just eight of England’s 104 on-shore wind farms last year. Those that fall below 25 per cent should not be eligible for any subsidy (sounds like a case of free market principles merging with government policy trying to produce more desirable results). A further 7,000 sites are planned for the next 12 years to meet European targets on cutting greenhouse gas emissions. This is a cautionary tale for the future of American subsidized renewable energy.