Gmail Integrates with Google Voice for Free Calls from Your Inbox

Gmail is integrating Google Voice, bringing free calls to the U.S. and Canada and cheap international calls to Gmail—and it's available today.


Calls to the U.S. and Canada will be free for at least the rest of the year and calls to other countries will be billed at our very low rates. We worked hard to make these rates really cheap (see comparison table) with calls to the U.K., France, Germany, China, Japan-and many more countries-for as little as $0.02 per minute. 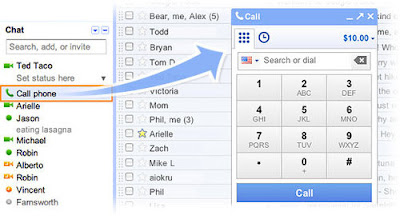 As soon as it's available in your account, you'll see a Call phone link in the Chat sidebar of Gmail. Click it, search for a contact or dial their number, and voila—phone call. If you've already got a Google Voice number, calls you make from Gmail will show your Voice number in that person's caller ID. You can also receive calls (if you choose) made to your Voice number directly in Gmail—making it a fully legitimate VoIP solution.

Google's rolling out the feature over the next couple of days in the U.S., so keep your eyes open. You'll need to have installed the Voice and Video plug-in to use it. It's not available on Google Apps accounts (yet), but Google says they're working on it.

This new feature from Google supersedes the need to use Sipgate as outlined in my previous post on how to make free phone calls from your PC to anywhere inside the US and Canada, and simplifies the configuration.
--------------------------
Update: on the first day of service over 1,000,000 calls were placed through gmail. Look out AT&T and Verizon.
Posted by The Grouch at 2:57 PM