How to Make Free Phone Calls From Your PC

Anyone who has followed some of my posts on the Internet knows I hold a dim view of the long term prospects for the country's major communication companies like AT&T and Verizon.  The reason is quite simple--- they are technology companies, not regulated communications utilities anymore, and anyone who doesn't recognize this is in for a continued decline in the value of their investment.  As speeds continue to increase on the Internet as a whole and cell phones continue to develop a richer feature set, these technology along will render the "cash-cow" copper line business obsolete, and take a large bite out of the revenue steam of these companies that they will have difficulty replacing.

To illustrate my point, I am going to demonstrate how to set up your PC to make free Internet based phone calls.  The only equipment you will need to pull this off is a high-speed Internet connection, a fairly modern PC, a headset with microphone and a router.  We will use Google Voice in combination with Sipgate to make the connections into the existing telephone network.  To keep costs down even further we are going to configure this on a Linux operating system with free software components.

Go to website http://google.com/voice, set up an account and acquire a Google Voice phone number.  Google Voice can perform two main tasks: 1) provide a single phone number that can be used to forward calls to other devices such as home phone # or cell phone #, and 2) allows you to make toll free calls anywhere in the US.

Go to website http://sipgate.com and set a free single number account that will allow you to make VoIP calls from your PC.  Their number bank is limited as of this writing and California numbers may be all that is available.

Step 3: Set up your softphone on your PC

On Linux download the Ekiga package and configure the phone.  In my case go to the Edit->Accounts option and set up an account for Sipgate.  For those who run Windows, Sipgate has a softphone on their website that can be downloaded. 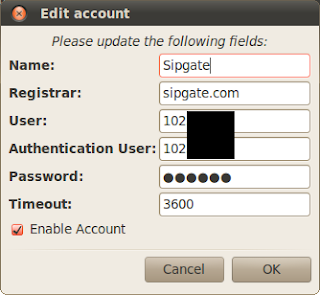 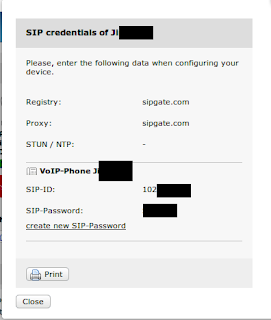 Start Ekiga and it should connect to Sipgate.

Step 5. Configure Google Voice to connect to your Sipgate softphone.

If you have done this correctly, your Chrome browser should have a blue phone in the upper right corner that can be used to control Google Voice. 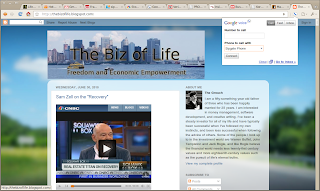 In the Google Voice window above, type in the number to call and hit connect.  Google Voice will then call your Sipgate phone.  Ekiga will issue the following prompt. 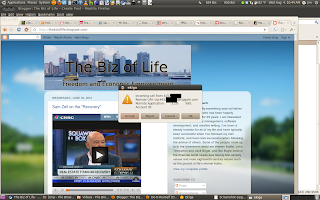 Click accept, then Google Voice will be connected to your softphone as it initiates an outbound call to number you wish to contact.  After a few seconds, you will hear the ring of the other number being called.  This is the trick that makes this technique free-- Sipgate only charges for outbound calls initiated from the softphone; Google Voice looks like an inbound call, even though it subsequently makes the other side of the connection.  Google Voice can also be used to bypass toll charges on your traditional land line.

Step 8: Configure your Router for Quality of Server

Assuming you have a router with QoS capabilities, make the sip protocol a premium service so it will get the required bandwidth necessary to give you a satisfactory voice experience.  On my router running DD-WRT, the config looks like: 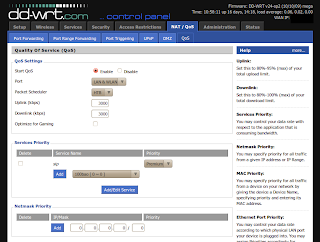 If a hack like me can figure this out, imagine what the future holds with a bunch of genius teenagers thinking outside the box.  In theory you could replace your landline with this set-up, saving yourself $600-$1200 a year.  Both Google Voice and Sipgate feature voice mail and caller id for free, and can forward calls to any phone of your choosing at no charge.  This is why I am pessimistic on the long term outlook for phone companies in particular, and believe that cable companies are vulnerable too.
Posted by The Grouch at 8:09 AM