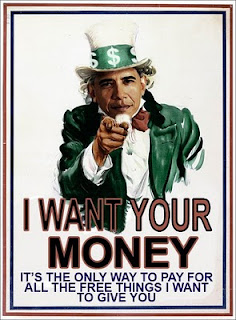 Alright, I swore to myself I wouldn't write anything today about the so-called "healthcare" bill. I'll try hard to keep my word since so many others are blogging about it and I've about overdosed on it over the past few weeks.

But one headline I did notice over the weekend is that a number of publically traded companies’ bonds are now trading at lower yields than US Treasury bonds, signaling that the market thinks they are more credit worthy than the government, even though the government can print money whenever they feel like it. With trillion dollar plus deficits forecast as far as the eye can see, it’s not much of a surprise. The only market place discipline the government has is the level of demand for its bonds when it floats new debt. The less credit-worthy the country, the higher the risk, and the higher the interest rate.

Who are these lucky companies? You could probably guess most of them since they are stalwarts with a rock-solid reputation. Berkshire Hathaway, Proctor & Gamble, Johnson & Johnson, Lowe’s, Abbott Labs, and the Royal Bank of Canada. There’s little question in my mind that the flood of treasuries hitting market will keep pushing yields up. The healthcare bill will only make the situation worse.

In my own portfolio, I’m underweighting Treasuries and placing my faith in corporate American, the discipline of the marketplace and that corporate officers will practice more self-restraint and better financial judgment than our elected officials.
Posted by The Grouch at 6:06 PM