If Federal Employees Don't Pay Taxes Why Should You 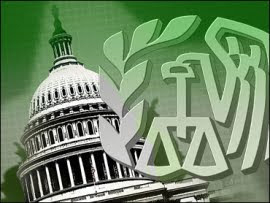 OK, the answer is obvious--- because you are an honest, law abiding citizen and don't want to get hit with a large fine by the IRS or thrown in jail for tax evasion. So why do 3% of all federal employees--- who have the most stable employment in the country, perks well above the private sector, and average salaries exceeding the private sector---- feel that they don't have to pay taxes like the other citizens? I don't know the answer, but 100,000 civilian federal employees owe the IRS $962 million in back taxes. If you include retirees and military service members, the numbers go from nearly 100,000 up to 276,000 current or former workers who owe $3 billion in taxes. Should the government fire these employees who won't cough-up what they owe Uncle Sam? What do you think?  There are a handful of Congressmen who believe this should happen. 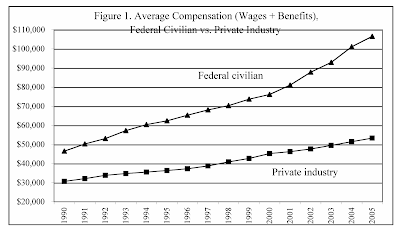 And what do you think of the disparity between the growth of federal and private wages and benefits?  This doesn't sound like shared sacrifice to me.  If health insurance company profits of 3.3% are unacceptable to our politicians, shouldn't the gap in compensation between Federal Civilian employees and Private Industry be intolerable to taxpayers?
Posted by The Grouch at 2:52 PM