The Economic Costs of Cash for Clunkers 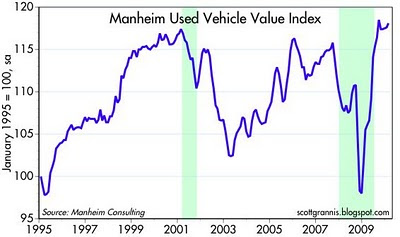 The Wall Street Journal has consistently lambasted the Cash for Clunkers program the politicians love to crow about. Edmunds.com reports that each new car sold cost the taxpayers approximately $24,000 apiece, a pretty hefty price. In addition, Edmunds estimates that of the 690,000 cars sold the Cash for Clunkers program shifted 125,000 vehicles worth of future demand into the 4th quarter of 2009, and that the remainder of the cars would have been purchased anyway. The WSJ estimates the annual gas savings of the higher mileage cars to be roughly $350M for the "investment" of $3B. What is much harder to estimate is the economic costs of destroying all the productive vehicles that were traded in and the impact to the used car market.

After my oldest son totaled one of our old vehicles, I got some first hand knowledge on used vehicle prices. Cash for Clunkers dramatically reduced the inventory of used vehicles available for sale.  The Manheim Used Vehicle Index shows the steep rise in used car prices.  While part of the explanation for the rise is the stabilization of the economy over the past year, the other major factor is the reduction of supply.  Anecdotally, the used car dealer told me he was paying $1500--$2000 more for the same types of cars he was buying one to two years ago, and ad walked away from a number of actions with no vehicles because the retail marketplace wouldn't bear that prices he'd have to charge to make a profit.

At a macro level Cash for Clunkers was a redistribution of wealth from the US taxpayer to the car companies and the few citizens who purchased an auto under this program.   For those now in the market for a used car, the unintended side effect was to increase prices for some of the very people who can least afford it.
Posted by The Grouch at 12:39 PM