Lessons from the Great Quake 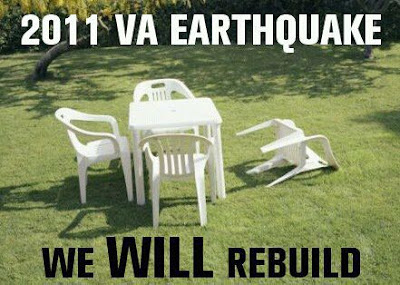 On Tuesday, as most of the country knows by now, the east coast of the US experienced a mild 5.9 earthquake.  This was a very unusual occurrence.  I've lived within 200 miles of Washington DC most of life and have not experienced anything like this before.

When the quake hit mid-afternoon, I was at work on the 7th floor of my office building.  At first I thought a large truck had hit the building or an airplane was flying very close by because the windows and floor were shaking.  When that shaking didn't stop after several seconds, I knew we were having an earthquake.

Some of my colleagues freaked out and headed for the exits as fast as possible, some even taking the elevator down to the lobby.  Me, I stood my ground, and stupidly or wisely went back into my office and continued working until the facilities manager ran down the hallway telling everyone to get out of the building now.  After walking down the backstairs, I joined the rest of the employees congregated around the building.  Only later that night did it dawn on me we were all standing in the shadow of the very building that we just evacuated while the building inspectors were checking its structural soundness.  Not very bright for a bunch of well-educated people since if the building had been damaged something could have fallen on us, or the whole building toppled over, but the herding instinct is strong.  We should have been standing far away from the building in the middle of the parking lot, not on the sidewalk right outside the lobby.

This incident also pointed out the lack of a business continuity plan at work.  If the building had been so damaged that we couldn't reenter, how would we have kept the business running?  All our papers and computers were in this one building, with some data backups offsite, but nowhere to recover to.  Not good.

The concept of business continuity should also apply to people and their financial lives.  The earthquake (and the hurricane following close on its heels) serves as another reminder that John and Susie Homeowner need to protect themselves from disasters also.  This starts with making sure the house is insured to cover today's full replacement value if you had to rebuild from the ground up.  But it also covers wills and trust documents, important financial papers, tax returns, etc.  A periodic backup or second copy of these should be stored in a safe place that can be easily accessed in the event of an emergency.  Life goes on even after a natural disaster strikes, but most people don't think about this until it is too late.