I was hoping to publish this post on Friday, but was too busy earning a living to get around to it. 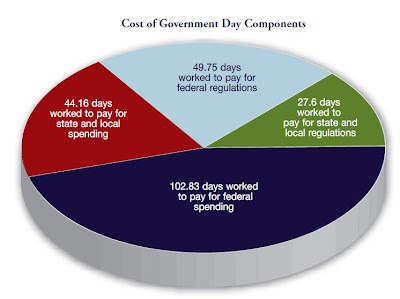 This year the Cost of Government Day, the true American Independence Day, falls on August 12st. Americans had to labor a full 224 days into the year to pay for local, state and federal government spending and regulations, or slightly over 61% of the days in a year. Anyone else think this number is too high? Didn't we have a revolution against the British over a less oppressive system regulation, mercantilism and taxation than this one?

From the Americans for Tax Reform study: "Cost of Government Day (COGD) is the date of the calendar year on which the average American worker has earned enough gross income to pay off his or her share of the spending and regulatory burden imposed by government at the federal, state and local levels. Cost of Government Day for 2011 is today, August 12. On average, workers must toil 224 days out of the year just to meet all costs imposed by government. In other words, the cost of government consumes 61.42% of national income.

Cost of Government falls two days earlier than last year’s revised date of August 14 (see top chart above). In 2011, the average American will have to work an additional 41 days to pay off his or her share of the cost of government compared to ten years ago in 2001, when COGD was July 2. In fact, between 1977 and 2008, COGD had never fallen later than July 20. 2011 marks the third consecutive year COGD has fallen in August. The difference between 2008 and 2009—from July 16 to August 14—was a full 29 days. The increase was spurred by government intervention in the form of the Emergency Economic Stabilization Act (EESA) that created the Troubled Asset Relief Program (TARP) and the American Recovery and Reinvestment Act of 2009 (ARRA).

The two day decrease of the 2011 COGD is only a temporary fall before projections of increased future spending. In March 2010, President Obama signed the Patient Protection and Affordable Care Act (PPACA) into law which will add $2.3 trillion to COGD over its first decade. Even without counting Obamacare’s contributions to future COGDs, the three years of the Obama Administration have been three record-setting years of federal government regulation and spending—a 21.78 percent increase relative to the average size of the federal government between 1977 and 2008.

1. The average American worker will have to labor 103 days this year just to pay for federal spending, which consumes 28.15% of net national product.

The full report can be found here.