Sticking it to the Man: Nanny State Beer 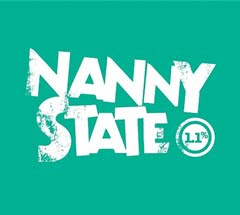 Earlier this year, British anti-alcohol groups protested the launch of an 18.2% ABV Imperial Stout by the Scottish brewery, BrewDog, flavored with jasmine and cranberries and billed as "the world's strongest beer." By comparison, the average alcohol content of a glass of wine is 11.5%; the average for a glass of sake is 13%-15%; and the average glass of beer 6%-8%.

In response to an attempt ban of this controversial brew, BrewDog has created a mild imperial ale called Nanny State with an alcoholic content of 1.1%.  The kicker is that the alcoholic content is low enough that it is not regulated or taxed as a beer in the UK.
Posted by The Grouch at 8:34 AM