The Hulu Desktop for Linux is now available and can be found at http://www.hulu.com/labs/hulu-desktop-linux.  I downloaded the 64-bit .deb for Ubuntu and installed it with no problems.  However, when I went to Applications->Sound & Video->Hulu Desktop, I received an error that the libflashplayer.so could not be found.  To fix this problem I downloaded the 64-bit flashplayer off of the adobe site and copied it to /usr/lib/mozilla/plugins.  I then edited the ~/.huludesktop configuration file to change the options under [flash] as follows: flash_location = /usr/lib/mozilla/plugins/libflashplayer.so.  Hulu Desktop then came up with no issues.  Sweet. 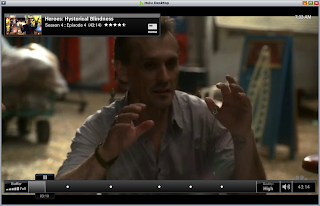