Relooking at Cash for Clunkers 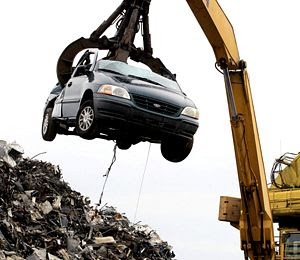 Remember "cash for clunkers," the program that subsidized Americans to the tune of nearly $3 billion to buy a new car and destroy an old one? Transportation Secretary Ray LaHood declared in August that, "This is the one stimulus program that seems to be working better than just about any other program."

If that's true, heaven help the other programs. Last week U.S. automakers reported that new car sales for September, the first month since the clunker program expired, sank by 25% from a year earlier. Sales at GM and Chrysler fell by 45% and 42%, respectively. Ford was down about 5%. Some 700,000 cars were sold in the summer under the program as buyers received up to $4,500 to buy a new car they would probably have purchased anyway, so all the program seems to have done is steal those sales from the future. Exactly as critics predicted.

Cash for clunkers had two objectives: help the environment by increasing fuel efficiency, and boost car sales to help Detroit and the economy. It achieved neither. According to Hudson Institute economist Irwin Stelzer, at best "the reduction in gasoline consumption will cut our oil consumption by 0.2 percent per year, or less than a single day's gasoline use." Burton Abrams and George Parsons of the University of Delaware added up the total benefits from reduced gas consumption, environmental improvements and the benefit to car buyers and companies, minus the overall cost of cash for clunkers, and found a net cost of roughly $2,000 per vehicle. Rather than stimulating the economy, the program made the nation as a whole $1.4 billion poorer.

The basic fallacy of cash for clunkers is that you can somehow create wealth by destroying existing assets that are still productive, in this case cars that still work. Under the program, auto dealers were required to destroy the car engines of trade-ins with a sodium silicate solution, then smash them and send them to the junk yard. As the journalist Henry Hazlitt wrote in his classic, "Economics in One Lesson," you can't raise living standards by breaking windows so some people can get jobs repairing them.

In the category of all-time dumb ideas, cash for clunkers rivals the New Deal brainstorm to slaughter pigs to raise pork prices. The people who really belong in the junk yard are the wizards in Washington who peddled this economic malarkey.

Couldn't agree more.... a tremendous waste of money and resources. Amazing that this is being touted by the pols as the most successful of the stimulus programs.... makes you wonder what the true negative economic impacts of the other stimulus programs are. 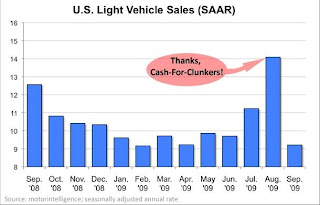