Cartoons of the Day: Libya 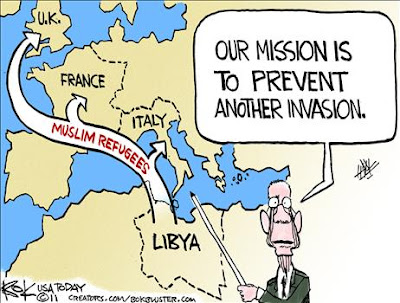 I generally try to steer away from too much political conversation, but it is hard not to have an opinion on Libya. I don't know anyone who is a Gadhafi lover, but what the heck is the US doing in Libya in the middle of a civil war, and in the middle of another conflict in the Middle East that may turn out to be a protracted affair? I'm of the mindset that the US doesn't need to spend taxpayer dollars this way (it must be in the hundreds of millions already for this mission) given the financial state of the country, and I don't think the American taxpayer should be saddled with the cost of rebuilding another country. I'm in favor of the US unwinding its commitments in Iraq and Afghanistan, and concentrating the country's efforts on becoming significantly less dependent on Middle East oil for our energy needs. The sooner we extract ourselves out of this "coalition of the unwilling" the better.
Posted by The Grouch at 6:40 AM