Are We Broke Yet? Michael Moore Says No To the Slap in the Face from Reality

"The nation is not broke, my friends," opines guerilla filmmaker and amateur accountant Michael Moore. "Wisconsin is not broke. Saying that the country is broke is repeating a Big Lie."

Relax, America, it turns out that all that talk about local, state, and federal government being broke is just total B.S. or, as The New York Times puts it, "obfuscating nonsense...a scare tactic employed for political ends."

Moore is a bit skimpy on evidence, simply asserting that all we need to do to make things right is to shake down rich people who "have diverted...wealth into a deep well that sits on their well-guarded estates." The Times' case isn't much more compelling. "A country with a deficit is not necessarily any more 'broke' than a family with a mortgage or a college loan," says the paper of record. "And states have to balance their budgets."

OK, but what should you call a family or a country that about 20 percent of GDP for each of the past 60 years while raising on less than 18 percent of GDP each year? And that is facing a massive balloon payment (let's call it entitlement spending on Medicare and Social Security) in the not-too-distant future? And has to keep borrowing money just to pay today's bills? And has no chance of increasing its take-home pay to cover its expenses?

It's a pretty safe bet that most of us would call that family or country broke. Or something along those lines.

Here are federal deficit projections from President Barack Obama's own proposed 2012 budget. He predicts that the red ink will continue to flow for as long he may be in office.

And what about the states? It's true that states have to balance their budgets each year by law. But that doesn't mean they don't spend more than they take in. Wisconsin alone is looking at a shortfall of $1.8 billion in the next year. Here's what the Center on Budget and Policy Priorities says about the mismatch between spending and revenue: "2012 is shaping up as states’ most difficult budget year on record. Thus far some 45 states and the District of Columbia are projecting budget shortfalls totaling $125 billion for fiscal year 2012." 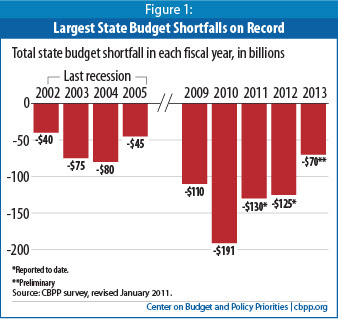 Then there's local government. The National League of Cities is estimating that aggregate revenue shortfalls between 2010 and 2012 will end up totaling somewhere between $56 billion and $83 billion.

As President Obama put it plainly in his State of the Union Address just a few weeks ago, "We have to confront the fact that our government spends more than it takes in. That is not sustainable."

So call us broke or call us flush with cash. Whatever. Unless you think our elected officials are like Charlie Sheen - able to cure our problems simply willing it - our fiscal reality isn't going to get better by pretending that we're not in deep trouble.

Maybe acknowledging that you've got a problem really is the first step to fixing it. If that's the case, we've still got a ways to go before we even start doing the hard work of cutting out of control spending at every level of government.

The full rambling, delusional speech by Michael Moore to the Wisconsin Teacher's Union is below: