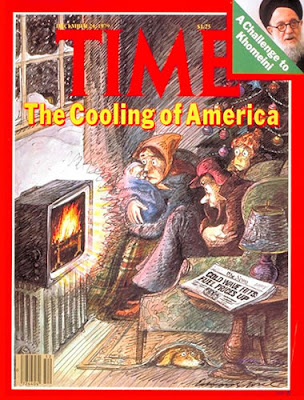 Back in the mid-1970s, global cooling was the rallying cry of the alarmists and crisis seekers-- a new ice age was upon us threatening to destroy the human race.  My, how times have changed, but the rhetoric has stayed the same----

"As they review the bizarre and unpredictable weather pattern of the past several years, a growing number of scientists are beginning to suspect that many seemingly contradictory meteorological fluctuations are actually part of a global climatic upheaval. However widely the weather varies from place to place and time to time, when meteorologists take an average of temperatures around the globe they find that the atmosphere has been growing gradually cooler for the past three decades. The trend shows no indication of reversing. Climatological Cassandras are becoming increasingly apprehensive, for the weather aberrations they are studying may be the harbinger of another ice age."