What is the GDP Per Capita for Every Country?

Anyone interested in comparing their standard of living to others in the world look no further than http://snippets.com/what-is-the-gdp-per-capita-for-every-country.htm. 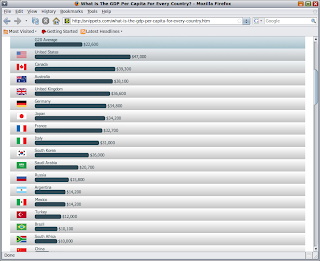 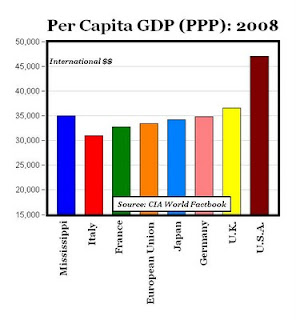 The above chart, taken from the Carpe Diem web site, displays GDP at purchasing power parity (PPP) per capita in 2008 using data from the CIA World Factbook (data available here).  Interesting to see how to US stacks up with the other major world economies, and that the poorest state in the US, Mississippi, still has a higher per capita GDP than everyone on the list except the U.K.  Explain to me again why some want to make the US more like Europe.
Posted by The Grouch at 5:57 AM