The Oklahoma Council of Public Affairs commissioned a study aimed at determining the basic civics knowledge of of Oklahoma High School students. They took ten questions randomly selected from the one hundred used by US Citizenship and Immigration Services to test applicants for citizenship. To become citizens, applicants have to get six out of ten correct. Here are the questions and results.

2. What do we call the first ten amendments to the Constitution? 26%

7. What are the two major political parities in the United States? 43%


When this test is given to applicants for citizenship, 92% score high enough to pass, while only 2.8% of Oklahoma high school students make the grade.  To be fair, the immigrants had a chance to study for the test while it was assumed that the high school students would absorb this knowledge from living all their lives in the US as well as civics class in school.  What the study points out is the alarming ignorance of these high school kids over the basic operation and purpose of government. I'm sure if this test were given to kids in each state similar results would be seen.

Of course, this begs the question just what the heck are both the schools and parents teaching our kids or failing to teach our kids. 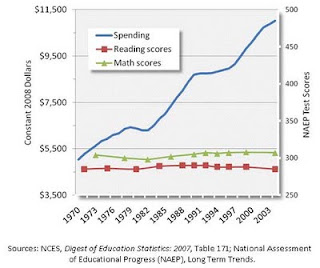 Since 1970, inflation adjusted public school spending has more than doubled while barely budging test scores, according to the Department of Education's own long term National Assessment of Educational Progress.  During this time high school graduation rates have declined by 4 to 5%.  A reasonable person might ask what has this increased spending on public school education gotten us other than higher taxes?  And if choice and competition is the answer to control costs and improve quality in the health care debate, why is it not being proposed to address our nationwide education shortcomings?
Posted by The Grouch at 5:03 AM