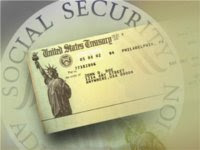 In a surprise to America's seniors, and for the first time in three decades, the government announced that since the recession has held prices down and inflation is currently so low there will probably be no raises in Social Security payouts for the next two years. Since seniors spend a disproportionately large amount of the their income on healthcare cost (which are rising faster than inflation) this represents a real cut in their standard of living. Also, my personal, unscientific observation is that grocery store prices for the common items purchased by most families are slowly rising just as package portions are being reduced.

This should send a clear message for those still in the work force-- you need to take care of yourself and your family, and you can't count on the government. It is my personal belief that due to its financial problems, the government will have little choice but to peg future social security raises below the rate of real inflation. For those under 40, I would advise building their financial plans assuming they will receive no social security benefits. I'm not trying to be pessimistic, just realistic. Most of the government entitlement programs appear to be collapsing under their own weight, and the assumptions of the past may not apply in the future.
Posted by The Grouch at 4:06 AM