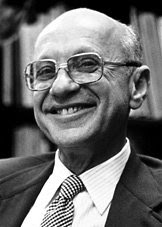 Any society that would give up a little liberty to gain a little security will deserve neither and lose both.
-- Benjamin Franklin

As the debate rages in Washington over the wisdom and cost of Obamacare, I was surfing the net and ran across an interview with Nobel Laureate Milton Friedman in Imprimus Magazine from July 2006 that are pertinent to the discussions of today. His advocacy of free market solutions should come as no surprise to anyone familiar with his economic philosophy.

LA: Is there an area here in the United States in which we have not been as aggressive as we should in promoting property rights and free markets?

MF: Yes, in the field of medical care. We have a socialist-communist system of distributing medical care. Instead of letting people hire their own physicians and pay them, no one pays his or her own medical bills. Instead, there's a third party payment system. It is a communist system and it has a communist result. Despite this, we've had numerous miracles in medical science. From the discovery of penicillin, to new surgical techniques, to MRIs and CAT scans, the last 30 or 40 years have been a period of miraculous change in medical science. On the other hand, we've seen costs skyrocket. Nobody is happy: physicians don't like it, patients don't like it. Why? Because none of them are responsible for themselves. You no longer have a situation in which a patient chooses a physician, receives a service, gets charged, and pays for it. There is no direct relation between the patient and the physician. The physician is an employee of an insurance company or an employee of the government. Today, a third party pays the bills. As a result, no one who visits the doctor asks what the charge is going to be—somebody else is going to take care of that. The end result is third party payment and, worst of all, third party treatment.

LA: Following the recent expansion in prescription drug benefits and Medicare, what hope is there for a return to the free market in medical care?

MF: It does seem that markets are on the defensive, but there is hope. The expansion of drug benefits was accompanied by the introduction of health savings accounts—HSAs. That's the one hopeful sign in the medical area, because it's a step in the direction of making people responsible for themselves and for their own care. No one spends somebody else's money as carefully as he spends his own.

I agree with Mr. Friedman; until we reestablish the direct economic relationship between doctor and patient healthcare costs will continue to rise. Divorcing the patient from the cost of the treatment as is done with private health insurance or government health insurance just drives up the demand for a finite resource and thereby the cost of healthcare. How many people today go to their doctor or the emergency room when they get the sniffles or just feel a litle run down? Too many. And without the deterrent of cash out of pocket to regulate the frivolous from the serious, the demand and costs for healthcare will keep rising.

The healthcare plans being considered now in Congress are clearly step 1 on the road to a single payer, government controled healthcare system, where the individual will cede to the government the responsibility for healthcare. Many view this proposal as a kind of freedom from the fear of catastrophic loss, but it is really serfdom in disquise, the abdication of freedom and responsibility to uncaring bureaucrats who want more and more control over the citizens.

I'm certainly not saying the current system is ideal or doesn't have much room for improvement. But that improvement won't come from turning the nation's healthcare system over to the same people who can't run Amtrak, the Post Office, Medicare, Medicaid, Social Security, etc. There are better and cheaper ways to reduce costs and protect against catastrophe.