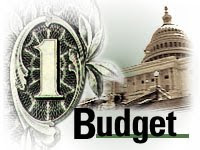 When the people find they can vote themselves money,
that will herald the end of the republic. -- Benjamin Franklin

Over the week the government announced it is raising its budget deficit forecast to $9 trillion dollars. This is a mind-boggling number. This should scare the crap out of every American citizen, regardless of their political beliefs. Federal spending has been rising at an irresponsible rate since the Clinton administration left town, and has accelerated greatly in the current administration, threatening the reserve currency status of the dollar and setting the stage for inflation and a devaluation of the currency.

No less luminary than Warren Buffett expressed his concerns in a recent New York Times editorial entitled The Greenback Effect. This is must reading for all American citizens, and the politicians would do well to heed its warnings.

Along these same lines, I found a recent YouTube video that outlines the impact to the economy of overspending by the government. While some readers may find parts of this video arcane, it illustrates the point there is a finite amount of capital in the world and the more capital the government absorbs the less is available to the private sector, which is the growth engine of the country.