My Experience with Windows 8 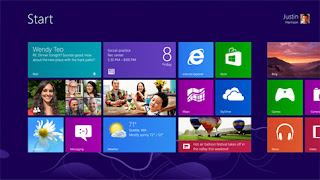 First, let me state that I am long-time linux/unix/solaris user on my home computers. I use windows for two reasons: 1) to print coupons, and 2) to do my taxes once a year. Other than that, I have little use for windows, and absolutely no use for extravagantly priced Apple products. However, I thought now might be a good opportunity to replace my copy of Windows XP with something more modern. So I forked out my $65 bucks and took my chances with Windows 8.

A few days later a package arrived containing the 32 and 64 bit versions of Windows 8 Pro along with a product key. I attempted to install the cd on a PC I'd wiped clean. On the first try, the install hung after accepting the customer agreement. On the second try, the install could see my hard drive, but refused to apply the software. To get around this problem, I installed an old copy of Windows XP and was then able to successfully upgrade to Windows 8.

I now had Windows 8 installed on my hard drive, and began getting used to the major changes in the user interface. I found the system, the new graphics and the metro ui to be visually appealing. However, the bouncing back and forth between the metro ui style screens and the Windows 7 style screens felt very jarring, and like two disparate operating systems were being pasted together to try to make a whole. The user experience is disjointed to say the least. The metro ui is not particularly mouse friendly and seems designed for tablets, not desktops.

Weird is the one word I'd use to describe the user experience, but at least everything was working correctly so far. That is, until I decided to apply system updates. That's when things all went to hell. After the updates, my sound no longer functioned and my video went on the fritz. I couldn't figure out how to fix these problems so I went to plan B--- install Windows 8 in a VM under linux.

Things went swimmingly with Plan B until it came to activating the release. Windows 8 refused to accept the product key that came with the product, even though it was typed in correctly. I'll be researching this problem over the next couple of days to determine how to fix. Needless to say, the initial experience of this user has been less than satisfactory, and I'd advise those running Windows 7 not to rush to upgrade to 8.

PS: I should also add that media center does not come with Windows 8 Pro. You have to buy that separately. For a limited time Microsoft is offering Media Center for free to early adopters. I applied for my free license key for media center which was supposed to be emailed to me within 48 hours. It's been over a week now with no communication from Microsoft. It's not difficult to conclude that my experience with Windows 8 has been rather sucky. I'm glad I have viable alternatives.
Posted by The Grouch at 3:45 AM