Quote of the Day: Matt Ridley

The entire argument for green jobs is a version of Frederic Bastiat’s broken-window fallacy. The great nineteenth century French economist pointed out that breaking a window may provide work for the glazier, but takes work from the tailor, because the window owner has to postpone ordering a new suit because he has to pay for the window.

You will hear claims from Chris Huhne, the anti-energy secretary, and the green-greed brigade that trousers his subsidies for their wind and solar farms, about how many jobs they are creating in renewable energy. But since every one of these jobs is subsidised by higher electricity bills and extra taxes, the creation of those jobs is a cost to the rest of us. The anti-carbon and renewable agenda is not only killing jobs by closing steel mills, aluminium smelters and power stations, but preventing the creation of new jobs at hairdressers, restaurants and electricians by putting up their costs and taking money from their customers’ pockets.

We now have an estimate, from meticulous work in a new report by the Renewable Energy Foundation, of just how costly those subsidies are going to get in a few years’ time: £15bn a year, or 1 per cent of GDP. Ouch. That’s more than this year’s growth.

Contrast that with news from the United States that, according to a report from IHS Global Insight, the cheap shale gas revolution now in full flow has created 148,000 jobs directly within the gas industry and – by making energy cheaper – has created at least another 450,000 jobs elsewhere in the economy. By 2015, the total impact of shale gas will be 870,000 new jobs, says the report.

Shale gas now provides more than a quarter of American gas from a standing start about five years ago. Its effect has been dramatic. Whereas gas prices rose sharply here in the last two years, pushed up by oil prices, the Libyan civil war (which constricted supply) and the Japanese earthquake (which boosted demand), by contrast they stayed low in the United States.

~ Matt Ridley, from In America, the shale gas revolution is creating jobs and growth. It can here too

Grouch: Ridley is his usual brilliant self in this editorial. Here in America, I'd say the shale gas revolution is happening in spite of the politicians and the resulting lower prices are prompting many, many folks to convert from oil and propane heating over to natural gas. Our anti-Energy Secretary Stephen Chu has wasted billions of taxpayer dollars on green energy companies with political connections, many of which have gone bankrupt even with massive government loan guarantees. Let's hope the political insanity on both sides of the Atlantic will end soon. 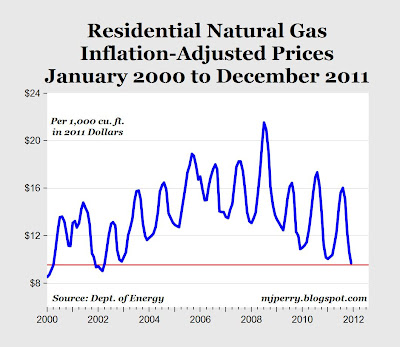