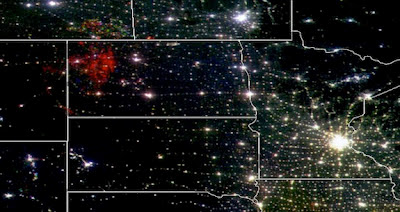 NOAA's National Geophysical Data Center has produced this image of the upper Midwest with the recent activity in the Bakken Shale highlighted in red. The image is a composite of cloud-free images collected over several years have been combined to make this picture: 1992 is shown in blue, 2000 in green, and 2010 in red. Places that had lots of light in all three years show up bright white (equal amounts of blue, green and red) -- that basically shows established cities and towns (like the Twin Cities) that haven't changed much over that time period. The red color indicates an area of bright lights in 2010 that was dark in 2000 and 1992. Bakken Shale oil-drilling boom got underway a few years ago. Oil is being produced from the Bakken by drilling and hydraulically fracturing long horizontal wells. The rigs and other facilities are highly illuminated at night because drilling is a 24/7 proposition - time is money so there is no 'down time.'

North Dakota is on-track to soon surpass Alaska and Texas as the number one oil producing state and this is going through an economic boom.

Contrast this with production statistics on federal lands recently published from the EIA: 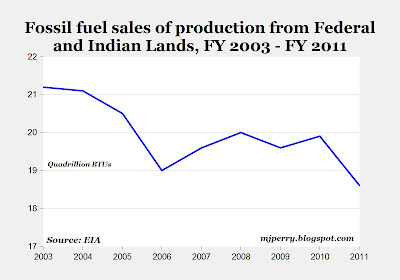 Contrary to what the politicians say, fossil fuel (coal, oil, and natural gas) production on Federal and Indian lands is the lowest in the 9 years EIA reports data and is 6 percent less than in fiscal year 2010. Thank goodness production on private lands is making up the difference.