Are the Polar Ice Caps Completely Gone Yet? 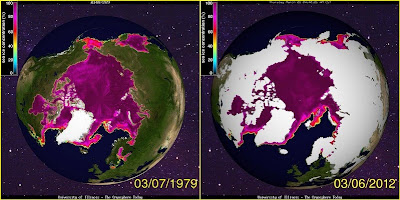 So much for Al Gore's prediction back in 2007 that there would be no sea ice in five years. The above picture from the University of Illinois shows that Alaska and Greenland are having a very healthy year for sea ice.


So much for an ice-free Arctic. Henry Hudson’s long-ago dream of a Northwest Passage that would link England to the Orient by sea will have to wait another century as Mother Earth gives him the cold shoulder. Again.

Same date satellite data seems to show that Iceland and everywhere else is iced over this year when they were feeling a little green 33 years ago.

Of course, our moral and intellectual superiors elsewhere in the press keep banging the drums of Man Caused Global Warming.